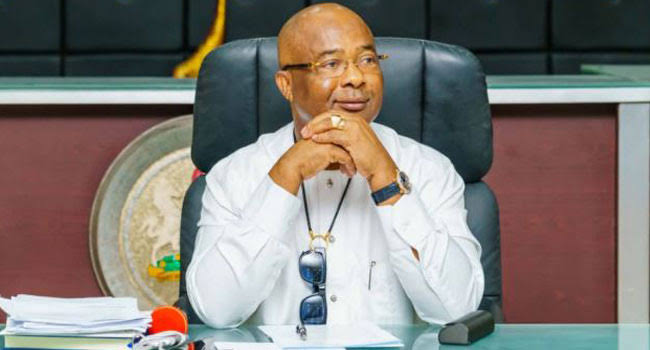 Imo State has once again found itself in a unique political situation after last weekend’s Imo North Senatorial District bye-election. First, the necessity for the bye-election, which was conducted by the Independent National Electoral Commission (INEC), was occasioned by the death of the erstwhile occupant of the seat, Benjamin Uwajumogu, last December, after the former Speaker of the Imo State House of Assembly from Ihitteuboma Local Government Area of the state, slumped and died in Abuja.

Among the 14, the APC was the only party that had problems, when it fielded two contending candidates (Senator Ifeanyi Ararume and Mr. Frank Ibezim). Ibezim, as gathered by The Guardian, had the backing of Imo State governor, Hope Uzodimma and the Minister of State for Education, Emeka Nwajiuba, both staunch members of the ruling party.

The combined forces of the duo contributed largely to the emergence of Ibezim. The screening committee sent from the party’s headquarters had initially objected to the candidacy of Ibezim, but the kingmakers of the party later filed the latter’s name to INEC.

Ararume quickly challenged the decision in the Federal High Court sitting in Owerri, presided over by Justice T. G. Ringim. In November 6, the court voided Ibezim’s candidacy, ordering that Ararume’s name be fielded.

Dissatisfied with the judgment, Ibezim appealed against the lower court’s judgment and approached the appeal court sitting in Owerri, with Justice Uchechukwu Onyemenam, leading other two justices, T. Y. Tukur and M. B. Idris, seeking to upturn the November 6 judgment.

The three-man panel of justices voided the decision of the lower court, validated the candidacy of Ibezim, and ordered the INEC to remove Ararume’s name and replace him with the appellant.

On the same day, the Federal High Court sitting in Abuja gave judgment, declaring that Ibezim was unfit to stand for the election on grounds that there were discrepancies in the two certificates he submitted to his party for the election that bear two irreconcilable names.

Before the development, the Acting Chairman of the INEC, Air Vice Marshal (AVM) Ahmed Mu’azu (rtd) on a visit to Imo State, accompanied by the Resident Electoral Commissioner in the state, Prof. Francis Ezeonu, had clarified that aggrieved aspirants and candidates were free to seek redress, adding that in line with the relevant laws, the commission would obey whatever orders the courts give.

His words: “It is also worth reiterating that the commission does not have adjudicatory powers. Section 285 of the Constitution vests in the courts and tribunals the power to determine pre- and post-election disputes.

“By section 285(14) of the Constitution, an aspirant who complains that any of the provisions of the Electoral Act or any Act of the National Assembly regulating the conduct of primaries of political parties and the provisions of the guidelines of a political party for conduct of party primaries has not been complied with by a political party in respect of the selection or nomination of candidates and participation in election is free to approach the Federal High Court, the State High Courts or the High Court of the Federal Capital Territory Abuja to ventilate his or her grievances.

“The commission receives the names and list of candidates validly nominated and in case of disputes, the courts are given the power to resolve them. The courts determine the validity of the conduct of party primaries and the commission is bound to comply with whatever the court determines.”

Before the election, and perhaps to avert incidences of violence affecting the exercise, the commission relocated the collation of result to INEC headquarters on Port Harcourt Road, Owerri, instead of the usual zonal office of the senatorial district, which should have been the headquarters of Okigwe Local Government Area.

A statement released days before the exercise by the INEC Commissioner in charge of Information and Voter Education Committee, Festus Okoye, said: “The commission has also decided that in order to forestall deliberate disruption of collation of results at the local government level, results will not take place in the constituency. Instead, after collation of results of the Registration Areas, all results shall be moved to the state headquarters of the commission, Owerri, for collation and declaration of results.”

Based on the strength of the pronouncement above, after the bye-election, the returning officer, Hakeem Adikum, at about 5.00 am on Sunday, declared the APC winner of the election, which witnessed low turn out. The party scored the highest votes, followed by the PDP’s candidate, Emmanuel Okewulonu.

Adikum announced that the APC polled a total of 36,811 votes, while the PDP got 31,903 votes. But Okewulonu has asked INEC to declare him winner since the APC allegedly had problems of authentic candidate.

From the results, there were 387,225 registered voters in the zone, with 75,223 total votes cast, 78,885 accredited voters, and 1,543 rejected votes. According to the Imo REC, Ezeonu, in clarifying the commission’s decision, pointed that in view of the conflicting two judgments held the same day, it was the best option to announce the party as winner rather than candidate.

Ezeonu informed The Guardian in a statement: “Events like this continue to expose the loopholes in our electoral law. Declaring the winning party without returning a candidate is the best INEC could do without infringing the law. We had two court judgments/orders.

“The one from the Appeal court dismissed the candidature of Ararume. Even at that, there was no consequential order to INEC as to what to do. Understandably, the people’s expectation is that we should return to status quo ante bellum, which is that Frank Ibezim is the rightful candidate. On the same day, an Abuja High court dismissed Ibezim’s candidature.

“Remember that all these were happening less than 24 hours to the election. It is noteworthy that by then all sensitive materials had been produced and deployed to the field. INEC had to go extra mile to withdraw all customized sensitive materials containing name of a court-disqualified candidate and replace same without disrupting the flow of electoral activities. I think we need commendation in this respect.

The best we could do in the circumstance was precisely what we did. Politicians in their partisanship have continued to put up different arguments. The PDP loyalists argue that the import of the two judgments is that APC has no candidate.

“Whether this is actually implied is left for the court to determine, not REC. For the APC apostles, there are two different interpretations, depending on where they belong. The Ibezimists believe that the Appeal Court judgment supersedes that of the high court, because it is a court of superior jurisdiction. But does this argument hold when the issue(s) canvassed at the high court is different from the one canvassed at the Appeal Court?

“Unfortunately, there was no such consequential order from the court. The point needs be made that INEC is a very lawful organisation committed to the rule of law. In obeying court orders, we do not make imputations.

“Until politicians learn to respect the internal democracies of their party, matters like this will continue to arise. Going forward, the electoral law should put a deadline to the adjudication of pre-election matters. It cannot be endless, if not election disruption of this kind will continue to happen.”

THE same day the results were announced, Governor Hope Uzodimma addressed journalists, arguing: “You (Imo North Senatorial District voters) remained committed once more and voted massively for the party (APC). We have shown that Imo state is an APC state committed to the ideals of the APC, committed to service and change.

The PDP’s candidate, Okewulonu, in his plea to be declared the winner, also said: “My primary reason for addressing you is to intimate you, as the Fourth Estate of the Realm and the conscience of the public, of concerted efforts being made to subvert the will of the people by denying me.

“It is not in doubt that the Saturday, December 5, 2020 senatorial bye-election was never contested by the All Progressives Congress (APC). In other words, the APC, following a series of conflicting court judgments, went into that election without a substantive candidate.

“The Independent National Electoral Commission (INEC), being fully aware of this undisputed fact, could not therefor, legally announce any person masquerading as APC’s candidate as the winner.

“It is, in fact, rather absurd and an intolerable aberration for INEC to have allowed the APC to even purport to have participated in that election, or to record any votes thereof in its favour. In the history of elections in Nigeria, it has never happened that a political party is declared as election winner without announcing immediately the corresponding candidate of that winning party, who is to benefit from its victory.

“INEC should stop playing the ostrich and do the needful in order to safeguard the sanctity and integrity of our electoral process. As an unbiased umpire, which it ought to be, INEC should have given life to the series of judicial pronouncements barring the purported two candidates of the APC, namely Senator Ifeanyi Araraume and Mr. Frank Ibezim from the election, as no party ever fields two candidates simultaneously for the same position in the same election.

Ararume, in an interview he granted an electronic media house, castigated Uzodimma, blaming the governor for his woes. But in his reply on Monday, the governor, through his Chief Press Secretary/Media Adviser, Oguwike Nwachuku, urged the former senator to understand the fact that his people had retired him politically.

The statement said: “Our attention h been drawn to a recent pitiable interview on (not The Guardian), where Senator Godwin Ifeanyi Araraume attempted, but woefully failed to blame Governor Hope Uzodimma for the political oblivion he has recently found himself.

“Truth is that Araraume has been retired from politics by his people of Okigwe and there is no need of blaming governor.”A professor of law from the zone, Nnamdi Obiaraeri, said on that: “Contrary to the old norm, the election was conducted peacefully as there were generally no reported cases of voter intimidation, use of thugs or security officials to disrupt voting or collation of results, except a few or isolated cases in one polling unit in Isiala Mbano LGA and three polling units in Obowo LGA.

“INEC’s collation of the LGA results and declaration of the final result in Owerri instead of Okigwe, the Okigwe Zonal headquarters, created a lot of logistic nightmares for stakeholders although INEC cited security concerns for this decision.”

From all indications and general mood, people of Imo North Senatorial District and, by extension Imo populace, are anxiously waiting for who emerges to represent the zone in the red chamber of the National Assembly.  (The Guardian)

9,973 thoughts on “Suspense in Imo North as intrigues mar bye-election”